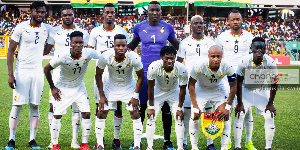 Two quick goals from either side of the half and a late curler from Mali saw them crush Ghana’s Black Stars in a friendly in Turkey on Friday night.

Captain Hamari Traore opened the scoring after just three minutes, before making the second right after the break when he assisted youngster El Bilal Toure with a beautiful cross. Amadou Haidara completed the mauling with fifteen minutes left.

Mali wasted no time in declaring their intentions following a swift interplay on the right to release captain Hamari Traore, who made no mistake by firing through the legs of goalkeeper Lawrence Ati Zigi.

The Malians boosted by the early lead controlled the opening exchanges, but momentarily Ghana had two quick chances which they failed to take.

The first from Andre Ayew whose interchange of passes with junior brother Jordan Ayew was cut out, a few minutes later the Crystal Palace attacker nearly connected a Partey cross from the right.

The Eagles exploited the left side of Ghana’s defence once again, with a cross from Hamari glancing the head of forward ERl Bilal Toure late into the first half.

Ghana coach C.K Akonnor brought on teenager Kamaldeen Sulemana to replace Eugene Ansah, who picked a knock, and immediately after the break, Bernard Mensah was also replaced by Emmanuel Lomotey.

Hamari and El Bilal worked their magic again just three minutes after the break to double Mali’s lead. A brilliant cross from the captain was strongly met by the 19-year-old Reims forward leaving Atio Zigi helpless.

The Black Stars looked overwhelmed after the second goal as C.K Akonnor made a couple of changes to seize control, but the Malians took advantage of Ghana’s lack of sharpness to add a third.

A defense splitting pass found Amadou Haidara, who effort first hit the post before he curled in from a tight angle to beat Ati Zigi.

Ghana will next play Qatar on Monday in their second friendly of the international break.