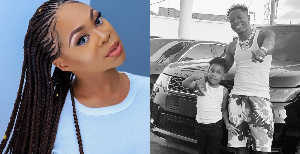 Baby Mama of Shatta Wale, Michy has disclosed that when she met the Shatta Movement boss and fell in love with him, he only had GH¢ 17 as his life savings.

According to her, she didn’t need his money but his love and companionship hence her agreement to get along with him.

“When I met him, all he had was seventeen cedis. For the showbiz, my mum had made me believe that it wasn’t good but as a young girl I was ready to explore. I didn’t really care that was why I stayed with him.”

Michy who was speaking to Emelia Brobbey in an interview said when she met Shatta Wale, he had a child with another woman but that woman wasn’t motivating him so she came in to do that.

The mother of one said although Shatta Wale was cheating while they were together, she did not leave the Dancehall artiste because of that.

To her, she wants him to live his life as an artiste so that he will feel free because with her around, Shatta Wale will want to hide certain things and she doesn’t want him to change for her.